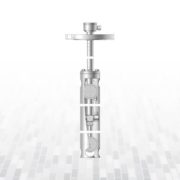 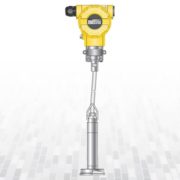 The smart level probe APR-2000/Y are used to measure the level in closed tanks where the medium is accessed from the tank top.

Smart Level Probe For Pressure Tanks APR-2000/Y are used to measure liquid levels in closed tanks, with static pressure up to 25 MPa, or 32 MPa for special versions and to measure differential pressure across constrictions such as filters and orifices.

Smart Level Probe For Pressure Tanks APR-2000/Y may be fitted with a range of types of process connectors, which enables them to be used in a variety of conditions such as thick or highly reactive media, high and low temperatures, etc.

Smart Level Probe For Pressure Tanks APR-2000/Y generate a 4…20mA output signal and a digital communication signal in a two wire system (current loop). The use of smart electronics enables regulation of the zero point, the measurement range, damping, radical conversion characteristic and other functions using an Aplisens KAP communicator or from a PC using a Hart/RS232 converter and Aplisens “Raport” configuration software.